Plans For The London Resort in the UK Have Been Revealed 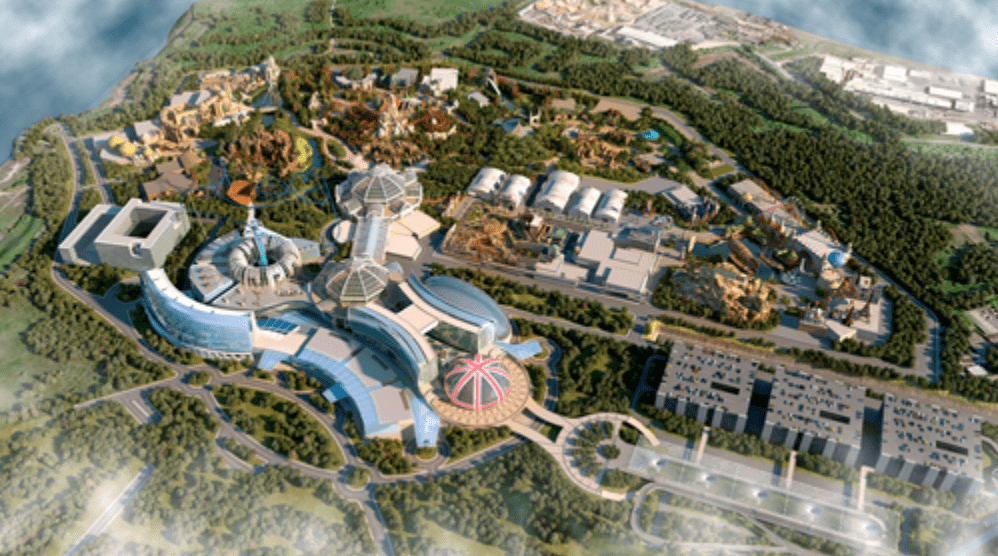 Across the pond, something big is in the works that will redefine how the world looks at theme parks. The London Resort, expected to open in 2024, will be the most sustainable, major theme park destination in the world. Partnered with EDF Energy to create an eco-friendly- Net Zero emissions goal- park spanning 535 acres! To give you an idea of scale, that’s the equivalent of 136 Wembley Stadiums.

Just this week, plans were revealed hinting at the “next generation” rides and unique experiences people can expect when the park opens in 2024. The London Resort announced its partnerships with the BBC, ITV Studios and, most recently, Paramount Pictures.

“We are creating a first-class theme park. A destination that maximizes all the new, immersive and interactive technologies and experiences in the world,” said PY Gerbeau, Chief Executive of London Resort Company Holdings (LRCH). “But we won’t just be creating a world class leisure destination, it will also be one of the most sustainable theme parks on the planet.”

“We have three guidelines we work to when it comes to developing attractions,” continues Gerbeau. “Number one is innovation. We’re not here to copy what’s been done before even if it has been successful. Number two is relevance.  We need to consider that the customers of today will not be the customers of 2024. And the third is flexibility. We need to create a park that can evolve and adapt easily.”

The London Resort will be the first European development of its kind to be built from scratch since the opening of Disneyland Paris in 1992. It will eventually be a two-park resort – the first ‘gate’ will open in 2024 and the second within five years (2029) and it is expected that around 70% of attractions will be undercover.

There will be six lands of The London Resort

The entrance to The London Resort will be via a grand plaza that leads visitors and hotel guests through ‘The High Street’. Full of shops, restaurants, hotels, a Convention Centre and a first-class waterpark.

Visitors can start their journey in The Studios, a gritty, modern-day warehouse district that practically roars with the exhilarating thrills of big, blockbuster features.  A winning combination of explosive action, high-octane car chases and high-stakes espionage.

Just to the north lies The Woods, an enchanted realm where springtime reigns eternal and the boundary between reality and fantasy dissolves. Here, the young and young-at-heart will be invited to step through the pages of a storybook and embark on adventures that put a fresh spin on beloved bedtime stories, fables and fairy tales.

From the Woods, the journey continues through the ages into The Kingdom, an immersive realm of swords, sorcery, dragons & legend. This is England as a dark and ancient land, a place of threatening and imposing castles and mystical Arthurian legends.

To the north lay The Isles, a land of giant creatures, mythical beasts and adventures at the crossroads of imagination and reality.  Fantastic jaw-dropping architecture will combine with magnificent rides and 21st century technology.

The past begins to blend with the future in The Jungle. Ancient ruins of a mysterious long-lost Mesoamerican civilization are seen pushing up through treetops. Here, an overgrown environment, brimming with ancient secrets, surprising discoveries and strange mystical artifacts will be transported to the present by inquisitive explorers – young and old.

The final land, dedicated to futuristic experiences, alien encounters and big thrill rides, The Starport is a bustling 23rd-century landing zone. It will launch visitors into thrilling science-fiction adventures that are out of this world, leaving them mesmerized at things that should be impossible but are not.