“The Grid. A digital frontier. I tried to picture clusters of information as they moved through the computer. What did they look like? Ships, motorcycles? Were the circuits like freeways? I kept dreaming of a world I thought I’d never see. And then, one day I got in…”

These are the opening words to the 2010 sequel film TRON: Legacy, the follow up to Disney’s cult-classic 80s sci-fi flick TRON. In the decades since the first film’s release, fans have been wowed by the concept of being able to step inside their computers and live out the digital games that have become a large part of our society’s entertainment. In the sequel, fans got a more modern take on the virtual world concept that help expand the story of the original. Although TRON: Legacy didn’t make a huge splash at the box office, it has still endured as a fun and imaginative film that is rumored to have spawned a new installation in the works starring Jared Leto.

Since the first film’s release, Disney fans have been wondering if the world of TRON would ever make its way into the theme parks. The universe created in the films has always seemed like it would be a perfect addition to a few different lands and parks like EPCOT and Tomorrowland. All of that wishing finally came to fruition when Disney announced that a brand new attraction titled TRON Lightcycle Power Run would be created as an opening day attraction for Shanghai Disneyland Resort in 2016.

This new rollercoaster was touted as a semi-enclosed steel motorbike coaster where riders would hop on their own lightcycle, like those seen in the films, and take a highspeed tour through the neon universe of the Grid. Upon its opening, the new ride received rave reviews for its combination of thrills and beautiful design and quickly became the resort’s highest-rated attraction. It proved to be such a hit that in 2017 Disney announced a version of the ride would finally be making its debut in the United States in 2021. 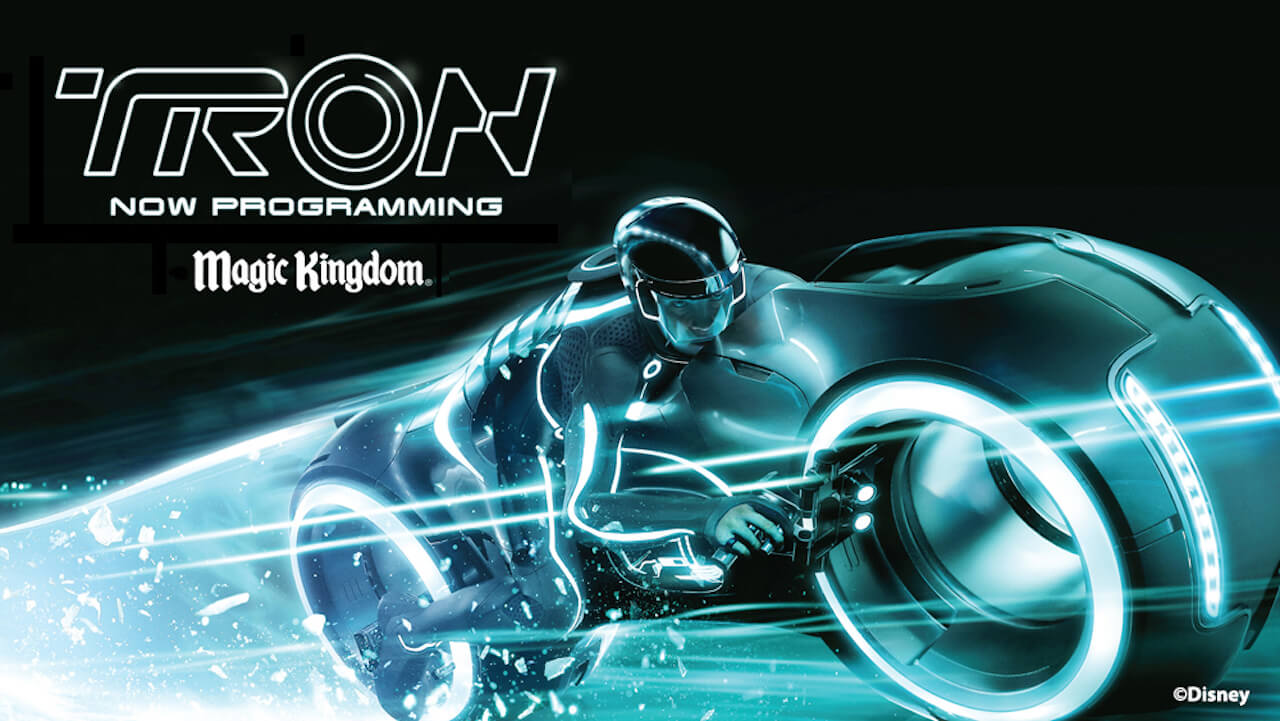 Announced as part of Walt Disney World’s 50th anniversary, TRON Lightcycle Run was touted as being basically the same design as the popular ride found in Shanghai. The new addition to Magic Kingdom will be placed in a newly expanded area of Tomorrowland, behind Space Mountain, and will offer the same brightly colored and fast-paced ride through the digital world aboard two-wheeled vehicles. It’s also being billed as the fastest ride to ever open at Walt Disney World. We were extremely excited at this announcement as TRON’s addition to Tomorrowland will bring a new level of thrill rides to Magic Kingdom that the park has been lacking. 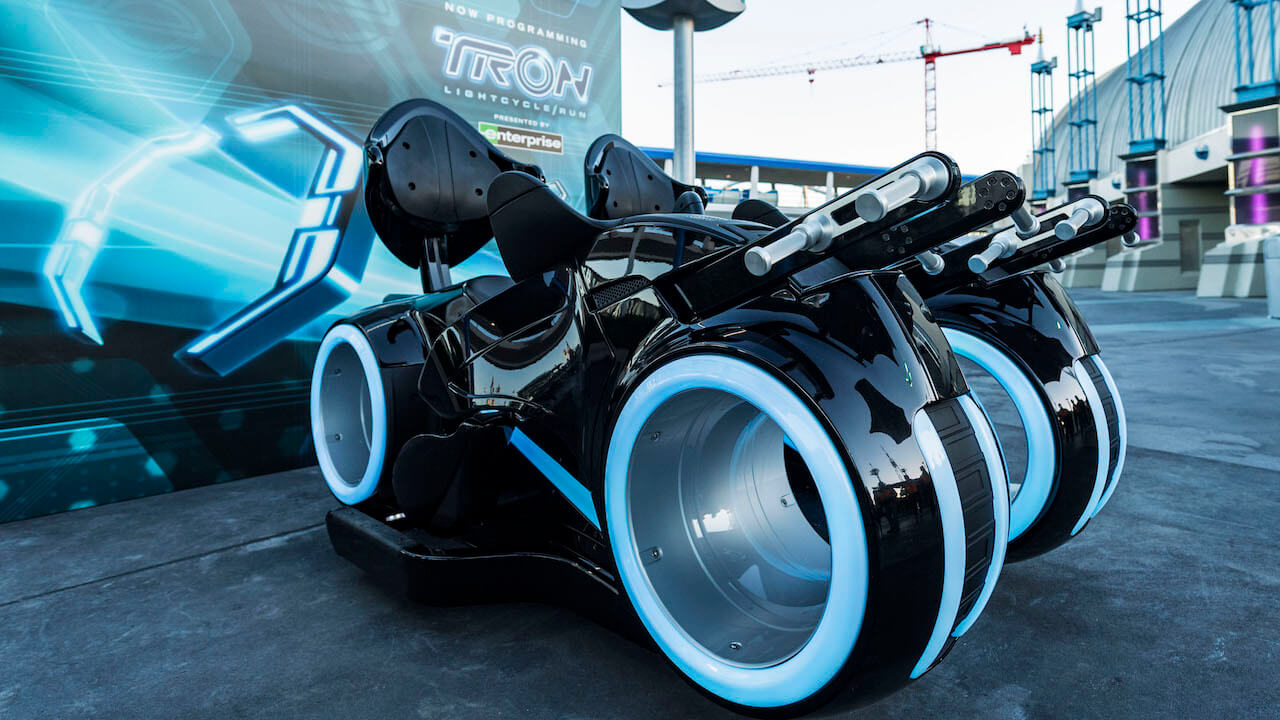 The ride’s vehicles are a relatively new concept in rollercoaster design. Instead of sitting in bucket-style seats with shoulder or lap restraints like traditional coasters, TRON Lightcycle Run uses newer motorcycle-style vehicles where guests straddle a bike and are then held safely with back restraints. This new style has been used to great effect in Avatar Flight of Passage in Animal Kingdom as well as down the road at Universal’s new Hagrid’s Magical Creatures Motorbike Adventure. While this design may not excite those with severe back problems, this new style of coaster vehicle adds a level of immersion as it thrusts you forward and puts you into the action, giving you the sense of flying through the attraction.

The ride’s environment is set to be one of the most dazzling nighttime displays you’ll find in Walt Disney World. The entire ride is awash with otherworldly bright blue neon lights and sleek angles. The Imagineers spared no expense in making guests feel as if they have left the real world and are taking a journey through the Grid’s fantastical glowing landscape.

Many guests worried that Walt Disney World’s recent lengthy closure due to the outbreak of COVID-19 would put TRON Lightcycle Run on the backburner, keeping it from debuting in 2021. Luckily the coaster is still in full-scale construction and still on schedule to open for the 50th anniversary. There has been a lot of speculation as to how a new and inevitably popular ride will welcome guests while still adhering to safety guidelines necessary in a post-COVID world. It’s relatively certain that TRON Lightcycle Run will use the new virtual queue system that has been used for the resort’s most recent headlining attraction, Star Wars Rise of the Resistance. This system allows guests to reserve a space in line by joining a boarding group. These boarding groups are then welcomed to the attraction in phases, allowing Disney to space out riders and keep lines from stretching around the park. It also allows you more free time to explore the park or enjoy other attractions while waiting to ride. So far the system has proven to work well, but the demand is still very high for Rise so you’re not always guaranteed a spot. We expect the demand for TRON Lightcycle Run to be just as high, but that the ride will be able to process a larger number of guests due to it’s shorter ride time, and expanded capacity compared to Rise.

While we are all eagerly awaiting the debut of TRON Lightcycle Run, we will be sure to bring you any new developments in its construction and opening as they are released!

This is a great time to plan your perfect vacation! Having a travel advisor means someone there to have your back in any occurrence. There is no additional cost to you and you have peace of mind knowing that your vacation is in good hands. Contact our friends at Key to the World Travel® for a free, no-obligation quote for your next trip. Click here.