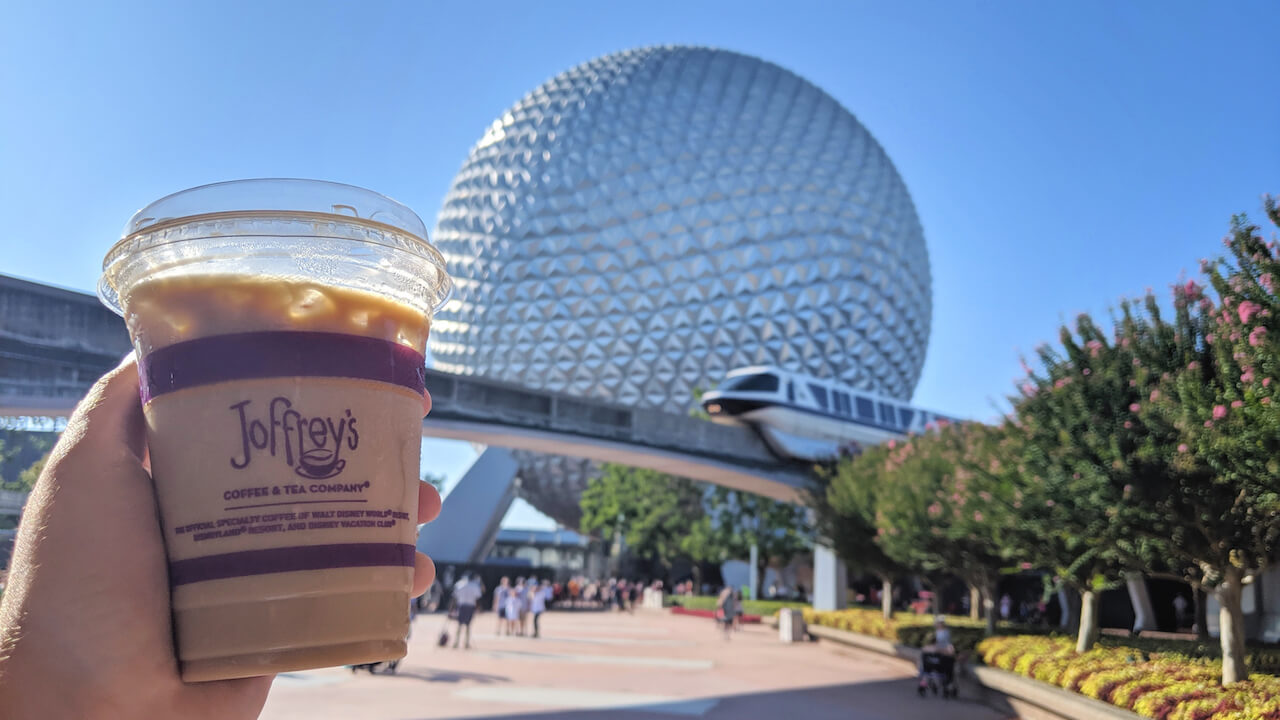 For many people like myself, a good cup of coffee (or five, let’s be honest) is imperative to a good morning. For those of us that need the caffeine boost to help us get going, it can be even more important during a visit to Walt Disney World. With all there is to see and do during your trip, you’re going to want that extra boost to help you tackle the parks and enjoy as much of the magic as possible. Luckily Disney has you covered with multiple coffee options throughout the parks, hotels, and Disney Springs. Not all coffee at Walt Disney World is created equal though, so let’s take a look at what coffee is offered and where you can grab that coveted cup of joe during your trip.

Joffrey’s is the official coffee brand of Walt Disney World as well as the Disneyland Resort. This Tampa-based company has been roasting beans since 1984 and is known as one of the first coffee roasters in Florida. Joffrey’s coffee is served at a multitude of kiosks as well as hotel rooms and restaurants throughout the resort. Joffrey’s serves a full lineup of standard coffee and espresso drinks as well as a large selection of hot teas. Each location offers pastries like doughnuts and muffins as well. For guests 21 and over, many Joffrey’s locations offer coffee cocktails with added alcohol like Irish Cream. If you’d like to take a taste of Walt Disney World coffee home, the company has created a Disney Specialty Coffee Collection featuring over 20 blends themed after Disney resorts and restaurants that can be purchased at one of the retail locations. Here’s where you can find Joffrey’s Locations at the resort: 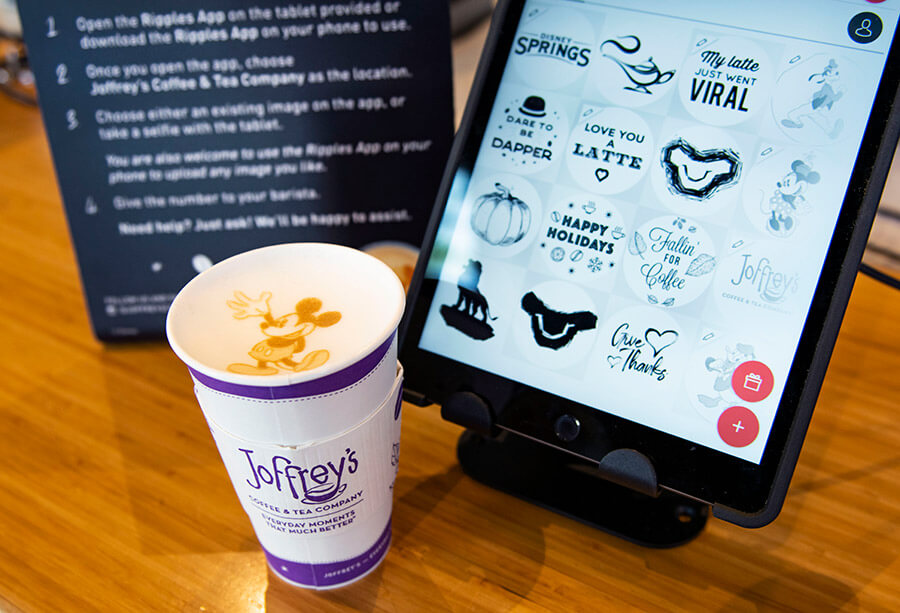 You can take your coffee drinking up a notch with a visit to one of a handful of specialty coffee bars found in a few Disney Deluxe and Disney Vacation Club resorts. These bars offer a more upscale coffee experience with a full lineup of coffee and tea drinks as well as pastries, smoothies, and hot chocolate. These are the perfect places to swing by on your way to the parks and can allow you to fuel up for your day before you arrive at the gates. Unfortunately during Walt Disney World’s phased reopening after its lengthy closure, most of the coffee bars at the resorts are not currently open, but you can still find Joffrey’s coffee at hotel dining locations and in the hotel rooms. We expect their inevitable return as the resort moves through its reopening phases.

Joffrey’s isn’t the only game in town for coffee at Walt Disney World. Coffee behemoth Starbucks was introduced into Walt Disney World parks and Disney Springs almost a decade ago and has since proven to be a very popular offering for visiting guests. The Starbucks locations at Walt Disney World offer most of the same menu items as the one you’ll find down the street, but with a few added Disney touches. Guests can find the usual coffee and tea drinks and pastries as well as Frappuccinos and seasonal offerings. There are a few exceptions that are left off the menu (like my favorite: Nitro Cold Brew) but for the most part, you should still be able to grab your usual coffee made the way you like it at home. In addition to Starbucks’ usual pastries and breakfast sandwiches, you can often find special Disney-themed treats like cupcakes as well as the “You Are Here” line of Starbucks coffee mugs themed to each park. If you’re looking for the best Starbucks experience at the resort, you’ll want to head to the location at Disney Springs’ West Side. This spot has a full menu as well as the Clover Bar that serves a lineup of specialty coffee blends not found at most Starbucks locations.

All Walt Disney World locations accept Starbucks cards for payment, and you can earn stars, but you won’t be able to redeem a free drink from the app at the theme parks. Free drinks earned through the Starbucks app can only be redeemed at Disney Springs locations.

Disney Dining Plans have been suspended during the resort’s reopening, but when they return you can redeem snack credits for almost anything on the menu. This can really stretch your dining plan dollars as many Venti Starbucks drinks can balloon to over the $5 average value of a snack credit. 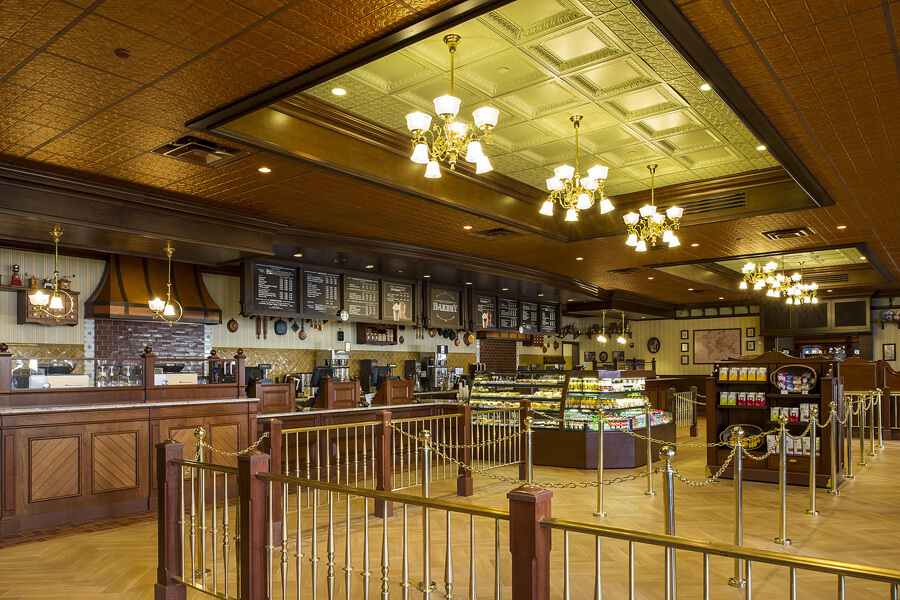 This is a great time to plan your perfect vacation! Having a travel advisor means someone there to have your back in any occurrence. There is no additional cost to you and you have peace of mind knowing that your vacation is in good hands. Contact our friends at Key to the World Travel® for a free, no-obligation quote for your next trip. Click here.