Disney’s Hollywood Studios was the third park to open at Walt Disney World on May 1, 1989. While it began its life as a park dedicated to giving guests a look behind the curtain to a working television and film production facility, it has changed over the years to focus on immersive storytelling. With the recent additions of Toy Story Land and Star Wars: Galaxy’s Edge, the park is quickly becoming one of the most popular sections of Walt Disney World Resort.

**At this time Walt Disney World is moving through a phased reopening with many attractions, restaurants, and character experiences temporarily unavailable.

The front half of Disney’s Hollywood Studios is a celebration of Hollywood in its mid-century heyday. Guests walk down Hollywood Boulevard, an idyllic Los Angeles street filled with buildings and references from the famous city. This leads to the iconic Chinese Theater which is the home to the new Mickey and Minnie’s Runaway Railway attraction.

Toy Story Land is Disney’s massive recreation of Andy’s back yard. Guests feel as if they are shrunk down to the size of a green army man and explore a themed land that looks and feels as if it were created by a kid playing with his toys. Oversized Christmas lights are strung high and giant Tinker Toys help make many of the area’s structures. Take a moment and see if you can find Andy’s footprint in the ground. The land features rides with favorite characters from the Toy Story film series like Alien Swirling Saucers and Toy Story Mania.

Echo Lake sits in the relative center of the park. It’s easy to find with its massive dinosaur statue that sits along the lake. Big attractions in this section are the classic Star Tours, the exciting live-action Indiana Jones Epic Stunt Spectacular, and the Frozen Sing-along.

Star Wars: Galaxy’s Edge will be the park’s newest and most exciting addition. Opening on August 29, 2019, the land has wowed guests at its sister location in Disneyland and quickly become one of the most impressive undertakings at a Disney theme park. Here guests will step through the screen and into a galaxy far, far away to live adventures from the classic series of films, shows, and books. Fans can fly the Millennium Falcon, build their own working lightsaber, or even have a drink at the cantina with a wretched hive of scum and villainy.

The Animation Courtyard is home to a dance party for the younger set, a walkthrough tour of the life of Walt Disney, and some amazing displays of Star Wars history. The courtyard is tucked away to the right of the Chinese Theater as you enter the park. 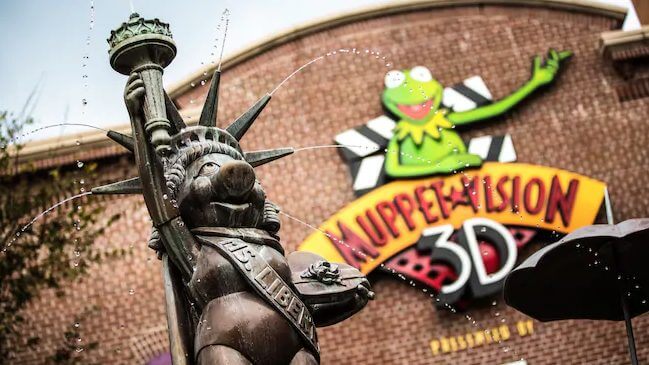 Grand Avenue is set up to resemble a classic New York City street. From the cobblestone walkways to the fake tore facades, the entire section makes you feel like you’ve stepped into an old film set in the big city.

Sunset Boulevard shoots off from Hollywood Boulevard and “dead ends” right at two of the park’s most thrilling attractions, Twilight Zone Tower of Terror and Rockin’ Rollercoaster. This street represents more of a coastal California vibe and can also be a good place to take a break as crowds tend to stay low in most of this area.

Wonderful World of Animation is the nightly fireworks and projection show that takes place at the Chinese Theater. Covering the rich history of Disney animation, the new show takes guests on a visual journey focusing on timeless themes featured in Disney’s classic films and characters. The use of new projection-mapping technology is not to be missed and transforms the theater into scenes and sequences that are some of the most impressive. Because of this aspect, we recommend grabbing a spot well before showtime with a good view of the theater to fully experience the projections.

If you need help planning your perfect vacation, contact our friends at Key to the World Travel® for a free, no-obligation quote for your next trip. Click here.