With so many rides and attractions included with the purchase of Disney Genie+, it may be hard to know where to start. There are 53 in total between the four theme parks. Here, we explore how to prioritize your Disney Genie+ selections.

We dive into which attractions to select, how to prioritize, and more.

Recently, some changes were made to the attractions that are included with the purchase of the Disney Genie+ Service.

In preparation for the busy spring and summer season, three popular attractions have been added to the Disney Genie+ Service. These attractions include:

These attractions were previously available for purchase as Individual Lightning Lane attractions. They will be included with the Disney Genie+ Service through August 7, 2022.

In addition, more character interactions and preferred viewing for the Festival of Fantasy parade at the Magic Kingdom are also available options.

There are two ways to purchase Disney Genie+ – add it to your vacation package or tickets prior to your visit for the length of your stay or add it on the same day. It’s beneficial to add it to your vacation package ahead of time because it is one less thing that you will have to do the morning of your visit. In addition, it is important to become familiar with the My Disney Experience app and how to use it in advance.

On the day of your visit, open the My Disney Experience app to select your first attraction just prior to 7:00 am. Below, we explore how to prioritize the attractions. We have organized them into three categories. 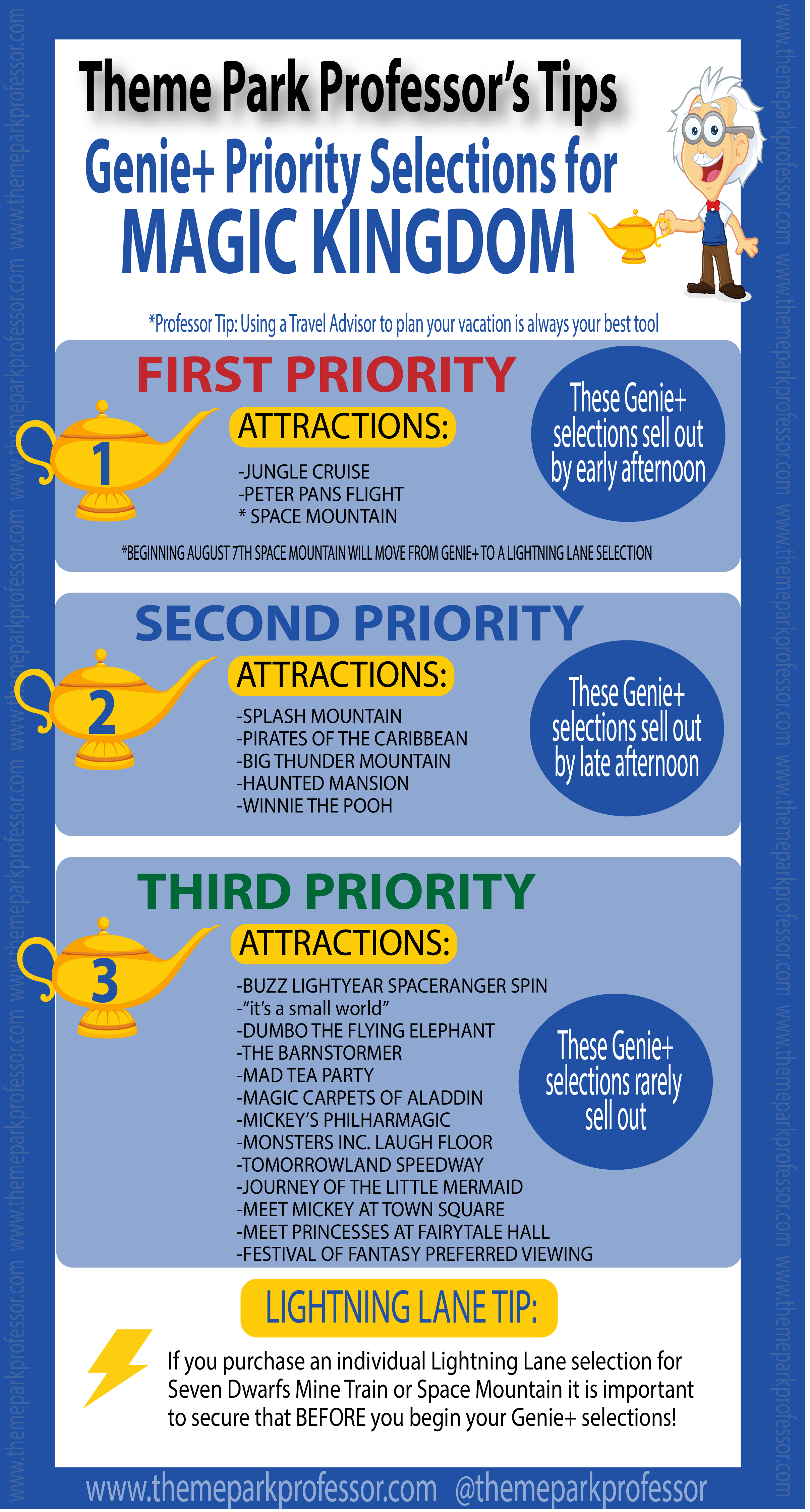 There are two attractions at the Magic Kingdom that tend to run out of return times quicker than the others. These attractions are Peter Pan’s Flight and Jungle Cruise.

These are the two Disney Genie+ selections that we recommend choosing first because are often gone by early afternoon.

As you continue to think about your day and how to select your Genie+ return times, there are some attractions that should be your second priority.

These attractions tend to sell out by the late afternoon.

Several of the other attractions at the Magic Kingdom should be considered your third priority. These attractions rarely sell out or sell out late in the day.

At EPCOT, there are two attractions that tend to run out of return times pretty quickly.

As mentioned above, Frozen Ever After is currently included with the purchase of the Disney Genie+ service. Determining which one to choose first will depend on your travel party. Test Track does have a height requirement of 40” so if you have young children, you may opt to do Rider Swap.

Once you scan in for your return time, be sure to grab the other one.

The rest of the attractions at EPCOT rarely run out of return times. While it may be beneficial to choose some attractions prior to others, especially during busier times, EPCOT is a very large park. Therefore, it is important to try and get attractions that are close together. In addition, keep in mind that you do not get to choose your return times. So, when you make your selections, check the return times available and choose what makes the most sense with the rest of your plans for the day.

At Disney’s Hollywood Studios, there are two attractions that are considered first priority. These are:

The return times tend to run out very quickly for Slinky Dog Dash, as this is one of the most popular Genie+ attractions between the four theme parks.

There are many great attractions to choose from as your second priority. These attractions tend to run out by mid-afternoon and include:

All of these attractions are open for Early Theme Park Entry. Therefore, if you are staying on property, it’s highly recommended to take advantage of the extra time available and enjoy a few of these before the park opens to other guests.

At Disney’s Hollywood Studios, there are also some third-priority attractions. These include several popular shows, but it is relatively easy to obtain a return time.  They may also be done using the standby line if needed. However, using Disney Genie+ for the shows often allows for better seating.

Disney’s Animal Kingdom has two attractions that are considered your first priority attractions. These include:

If you are a resort guest, take advantage of the Early Park Entry and head straight to Kilimanjaro Safaris. The animals are often most active in the morning and early evening. There is potential to have a great safari experience and save your first Genie+ selection for Na’vi River Journey. Both of these attractions tend to run out of return times by early afternoon, or sooner during busy times.

Although Expedition Everest is currently closed due to refurbishment, it is included as a second-priority attraction during busy times. During other times of the year, this attraction is available for purchase as an Individual Lightning Lane attraction.

DINOSAUR is another second-priority attraction. It typically sells out in the early afternoon, sooner than the remaining attractions available with Disney Genie+.

The remaining attractions are considered your third priority because they will rarely run out of return times. A few of these attractions are shows and can also be done easily using the standby line.

There are a few more tips to consider as you are planning your day with the Disney Genie+ Service.

1.) If you plan to purchase Individual Lightning Lane attractions, these should almost always be purchased first. The only exception is if you would like to ride Slinky Dog Dash, as that one runs out very quickly.

2.) Second-priority attractions are good to ride at the beginning of the day using the standby line when the crowds are still low. Then, if you want to do them again later, you can use Disney Genie+ to do so.

3.) The third priority attractions are good options to experience if you have downtime between return times. They are also good if you want to have a few return times close together.

4.) Things change all the time! If you are trying to get a specific attraction but do not like the return times, keep trying! Keep refreshing your app, as available times may change frequently.

If you love following along for the most up to date park information and news, follow us on Instagram too: @themeparkprofessor